I have always enjoyed video games. Maybe it’s the story they tell, being like a movie that you, the player, control the outcome, or maybe the characters that are in the game. It could even be an escape from the world. Whatever the reason I am drawn to them. Most of the time when people think “gaming” they often think of cards, or electronic gaming, however it isn’t limited to just those two, and it isn’t limited to a certain age group. The term gaming can be enjoyed by anyone.  When I was asked to set up a gaming tournament for the CLC, I didn’t know what to expect at first. I had never really planned and hosted an event like this before, so I wasn’t sure what to expect. The event was a huge success and if the opportunity arises I would certainly do it again.

One of the first things I did, before anything else, was research how to run a gaming club/tournament. One of the articles I found, written by Keith Levy, had some very useful information that I based most of the set up and event on. Once my planning had officially started I made up a checklist and a general information account. I created a flyer to get the word out, and as it went through changes, so did the event. I had originally planned to have the event be open for middle school and older, but anyone under 18 must have supervision of some sort, so  an age restriction of 18 was established. The event was set to be held July 16th. After looking around for a possible prize, and realizing without a company sponsor, the price of a gift card or some other prize would cost too much. After talking about other ideas and looking at other more affordable methods, the idea to make and give away a trophy was born. The idea for this trophy came from car shows or other events  in which the trophy is made out of parts that have to do with the event. The trophy was made from two old game cases, serving as the stand. An old controller for the top, and a small old metal pole holding it all together, and serving as a handle. 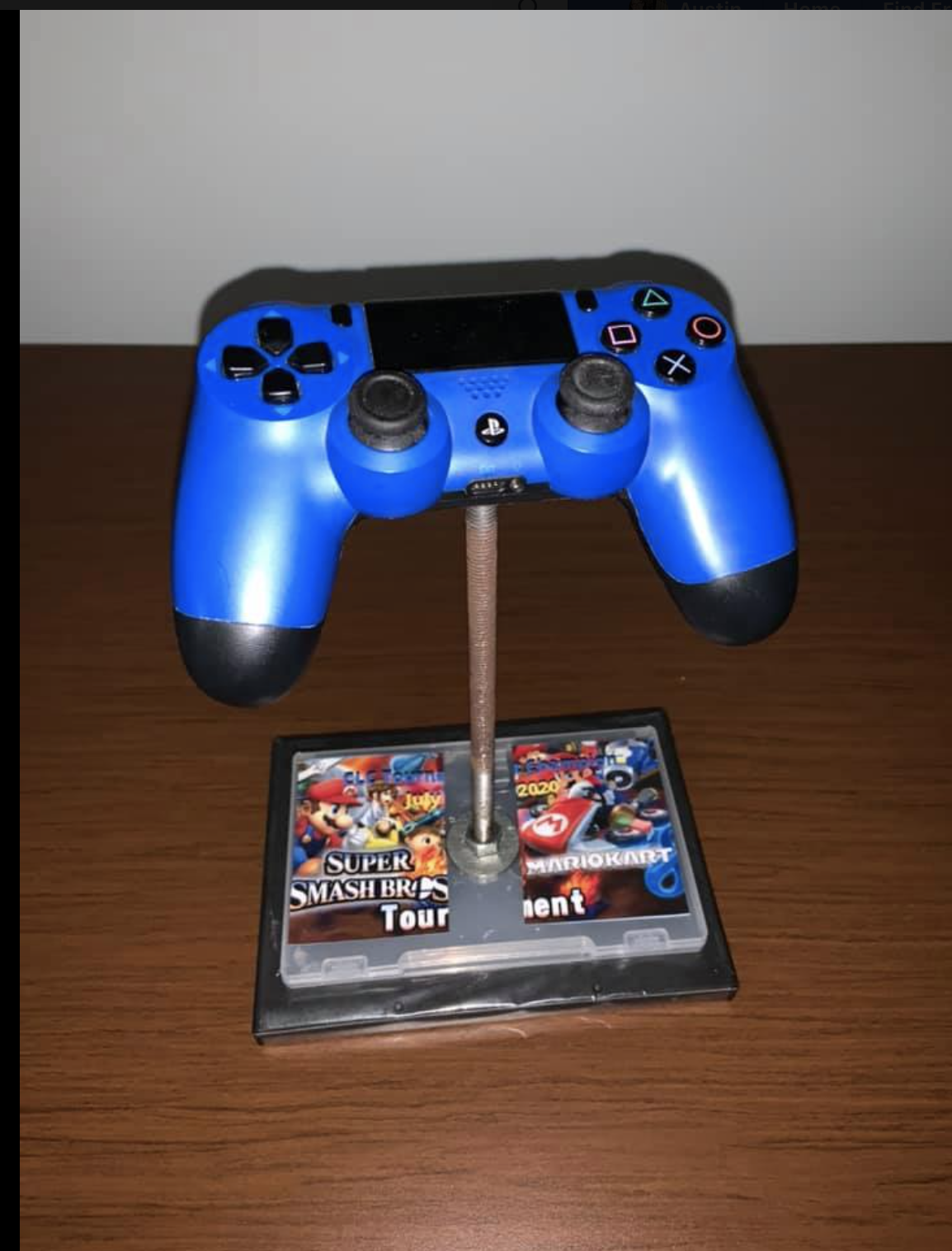 Once the trophy was built advertising began and sign ups started, or so I’d like to say. One of the biggest problems I faced was the audience and who was allowed to enter. As I’ve said, the event was originally going to be for ages 18 and over. Once I realized that those people in that age range we’re more likely to work during that time, I had to come up with a plan B. Plan B invloved approaching the director of a youth group, and seeing if the group would be interested, provided he or someone else was available to supervise. After a few emails back and forth plan B was set into motion and the new event was to be held July 22nd. After a few more preparations including testing the system, controllers and making a bracket,  the event was ready.

The tournament ran smoothly with no problems on the day of the event. I gave a short presentation and after the participants chose a nickname the games began. The tournament was a single elimination for the Super Smash Bros portion. The bracket was randomly generated and participants faced off two at a time. Once a match was concluded, set up for the next began. Set-up between each match was short and to the point, since for the most part all battle stages were random, and if they weren’t, one player knew which stage they wanted. 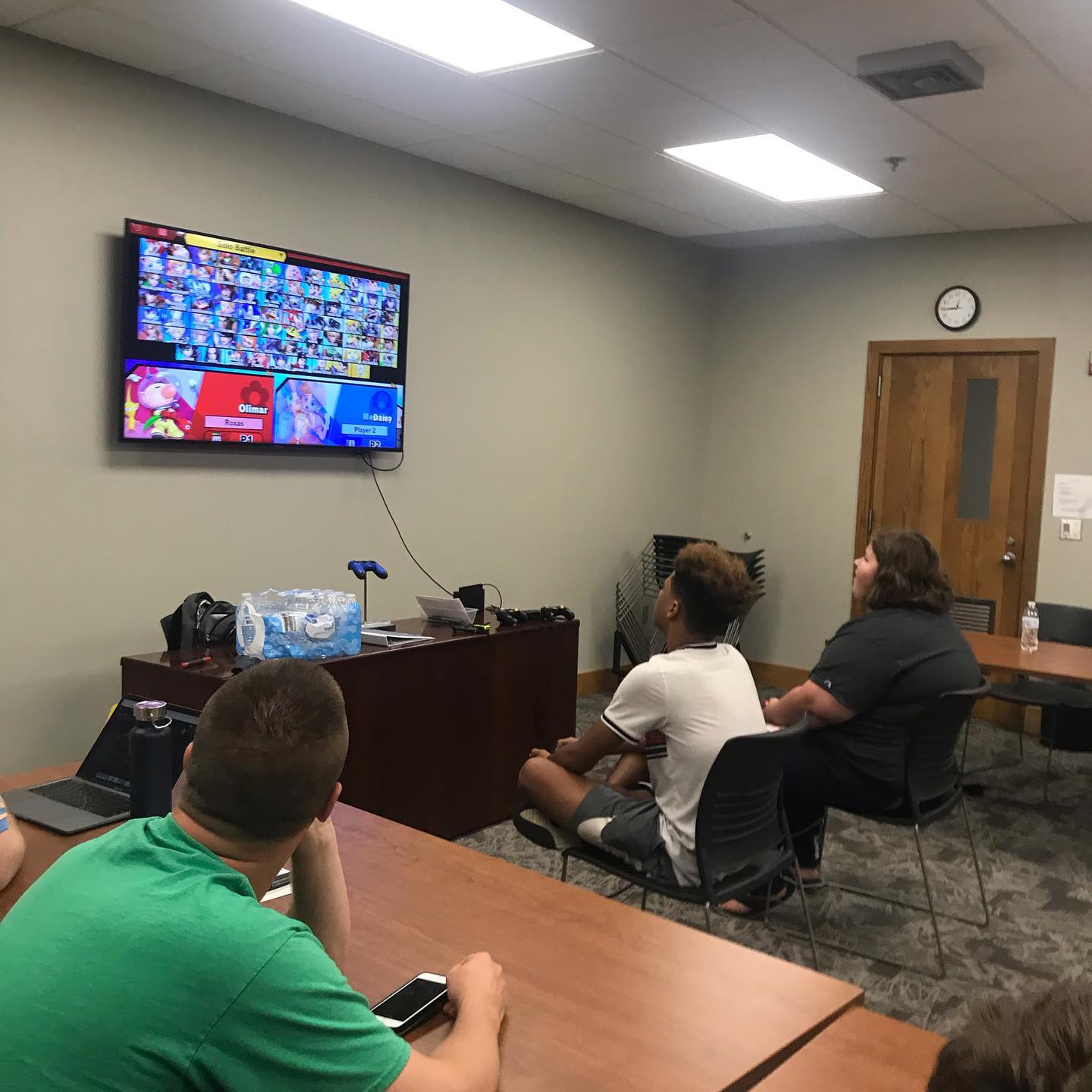 Some matches were short, and some went on for a bit longer, depending on the players. There were a number of participants that had never played before, however they were great sports and went along with the greatest strategy of press buttons to win, and for some it actually worked. During some points, the TV would cut out for a second and while this may seem like a bad thing, it actually became a good thing. Sure, the players couldn’t see what was happening for a second, but it added suspense to the match, of what would happen. After trying to fix the problem, troubleshooting a cord, we as a group decided to just go with it. As the final match-up approached, time was running short, with not much hope left for the second event. The finals ended with around twenty minutes, just enough time for a round of Mario Kart. I had wished I had only done Mario Kart, as it seemed to be the much more popular game. While some played, the rest filled out a short questionnaire about the event. After a few races, it was time to end the event, and the first gaming event of CLC had come to an end.

This entire experience was new to me. I had no idea how the event would be perceived. I was afraid the audience wouldn’t enjoy the games I chose, considering after talking to some parents, most younger kids play other games that I wouldn’t normally play. I also expected there to be many more flaws, however any flaw, such as the TV fading out, was made into a positive. I thought a majority of the audience that came in, wouldn’t have fun, however from my observation just about everyone had fun, even if they had no idea what they were doing. One of the unfortunate aspects was one game took much longer than I thought it would. If I had known this I would have only made the tournament one game. With few to no flaws the tournament was a success, and in the future I’d love to host an event like it again, or maybe even something new.

Gaming is something just about anybody can pick up.  Some people may be more reluctant about trying certain types depending on their age, but in the end, even those people are seen playing some sort of game. Gaming is also not limited to electronics or cards. It also includes chess, board games, and tabletop RPGS. While I tend to gravitate toward electronic games, I still enjoy cards, and board games, and would love to branch out in hosting some other style of gaming tournament. With all that said, You should never be afraid to try a game you wouldn’t normally try. If an opportunity arises to do something you enjoy, don’t hesitate in saying yes, because if you wait too long the opportunity will slip by and you will have lost your chance.